AdScanner, helloCash, Hopalai (with its Kobi App), Movalyse (with its Vigo insurance) and Soplaya were the finalists of this year’s PODIM Challenge. But pitching in front of the renowned investors brought only one winner – AdScanner, the Croatian based start-up, which is doing the next generation of television data. 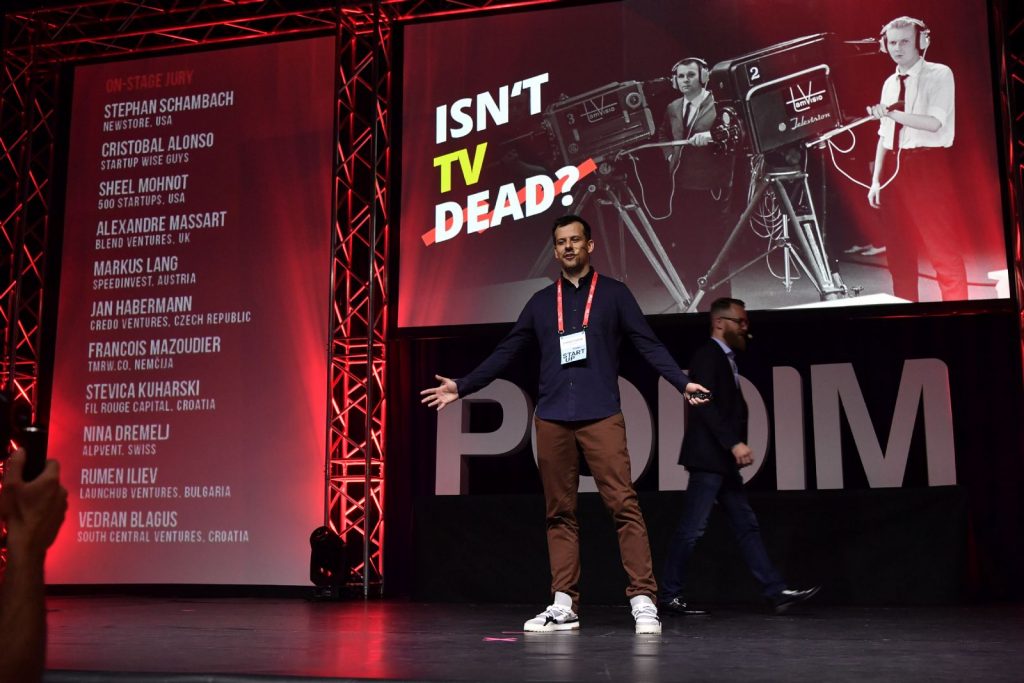 Marin Ćurković, AdScanner: “We measure what’s happening on TV. We identify the content that airs on TV automatically.”

The winning team will be awarded with an all-inclusive one-week business trip to one of the global startup hubs with a networking program and one year free office space for 6 members of the team in TMRW, south London’s No. 1 tech workspace. After winning the PODIM Challenge, Marin Ćurković, CEO & Co-Founder of AdScanner, talks about the meaning of victory.

Winning a PODIM Challenge is a recognition to your work, so what does it mean to you?
“It’s a fantastic recognition for our work, we see it as a proof that we really like coming to this region, having events in this region, because the networking has been really really fantastic. What it means for us? Well, we want to scale, we want to move to Western Europe, to North America, coming from this region but offering our services over there. Part of the award is we get to spend some time in the UK, meet some people there, and that’s fantastic for us.”

What is it that you do actually?
“We measure what’s happening on TV. We identify the content that airs on TV automatically. We also take measurment data to be able to know who’s watcing what and when. With that we want to help TV channels, advertisers, we help agencies and television companies to better use TV for their campaigns, for their content.”

So, you are controlling ads to know what they are ading, what they are talking about, to help those who may be making new ads?
“Exactly, to measure the impact of advertising better, to make it faster, more transparent, more data-based in essence. We learned from digital, so we would like to take the same metrics that are today applied in online advertising and take them to TV advertising.” 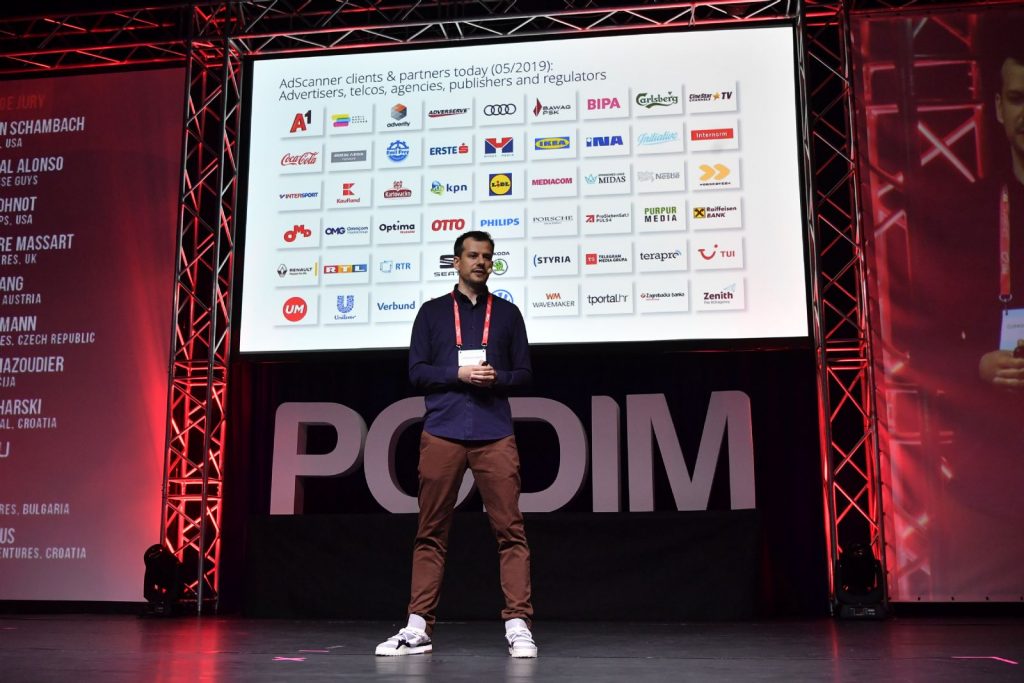 For how long have you been on the market?
“We founded AdScanner with the idea in 2012, me and my brother. We had full-time jobs, I was managing partner for the agency in Germany, he was a CEO for the Croatian telecom, and it was still a side project but it grew as a technology, so in 2017 we decided to go all in, to make this as a full company, to go to the market so we’ve been on the market for two years now.”

It is a Croatian-Austrian company …
“We are from Croatia, technology is based in Croatia as well as development, we are proud of that. When we went to the market, we were looking for partners, all across Europe, specially big television companies to partner up with, to scale with. Luckily we found a good partner at A1 in Austria, and that is why we said, Austria is a god hub for us, a good start market, so we made a Croatinan-Austrian company.”

How many customers do you have and do you have some big names already?
“Now we’ve crossed the line of 45 customers, one of those is A1, we have IKEA, we have Coca-Cola, we have Audi, we have beer companies, Carlsberg is one of them … so it’s all across the border and then there’s big TV channels and agencies.”

You’ve menationed agencies, but who else is your target group?
“Advertisers of the brands, the marketers on the brands’ side and more and more telecos themselves, they are big data hubs, they need to make better informed decisions on what they buy, how they bundle product for their clients and they are also our partners and clients.” 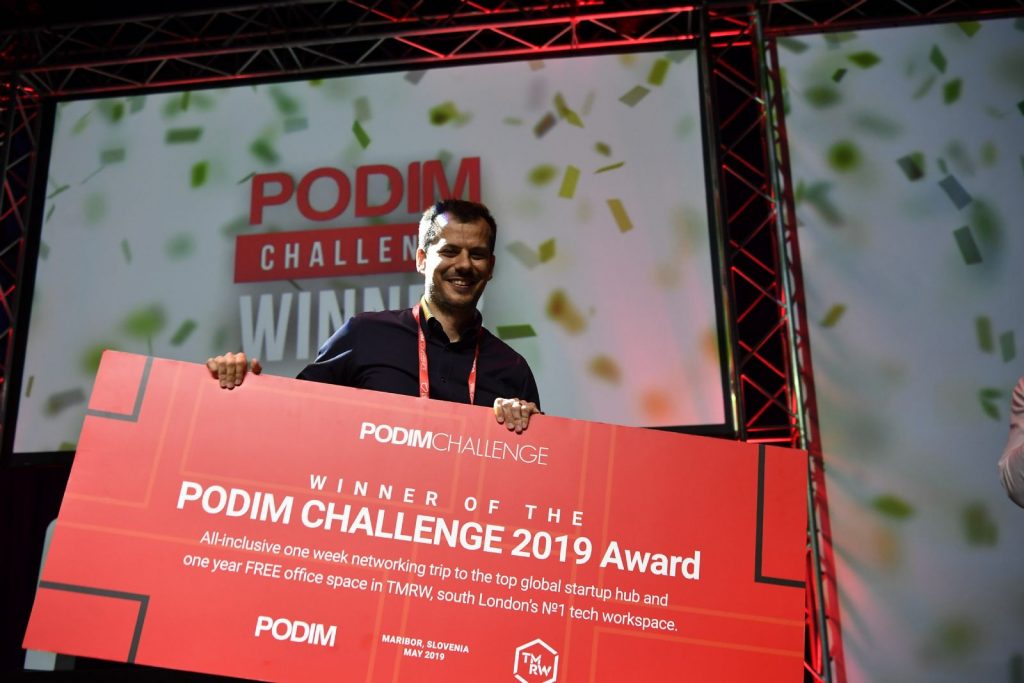 “It’s a fantastic recognition for our work,” Marin Ćurković says about winning the PODIM Challenge.

You are a startup, but you say for your selves you are a company working to solve a problem where the solution is not obvious and the success is not guaranteed.
“The first thing is that you always look at the problem, you look at something you want to make better in some way. And the success isn’t guaranteed, otherwise there would be no risk involved, otherwise everyone would be a startup, but a startup is something you really put a risk at in terms of time, in terms of money and in terms of the effort into the game.”

How did you come to this idea?
“I come from the media agency world, it means that you pretty much analyse, plan, buy and manage among others TV campaigns. And there’s a lot of manual work, there’s a lot of consulting work, a lot of intensive planning going on there. And we thought – isn’t there a way to make this things more transparent, quicker and more efficient by the use of data. While data is disrupting digital advertising very heavily, it didn’t really happen on TV.”

Did it become popular immedaitely?
“Well, in terms of pitching the idea as a startup to the right people, they’ve recognised the potential very early. Two years ago when we started compared to now, when the topics are becoming more and more popular, it’s a completely new story. We don’t have to explain so much anymore.”

But you were seraching for an investment at the beginning …?
“We sellfunded our company for two years, and only this year we took on formal investor, South Central Ventures, another regional investor, and it was our first proper investment round.”

How did you hear about PODIM and how did you decide to come here?
“We have heard about it few years ago. We aren’t actually the ones to go to 20+ events, we usually carefully select them, and it was really on a roadmap to go to PODIM anytime soon. This is a year, when we decided to spread out a bit more, especially in the region and try to use the potential here in the region to network. And we have heard it is a really really established event with great networking and a growing nubmer not just startups but also investors and corporates looking at them. And it’s close to us.”

So, did PODIM convince you?
“Yes, of course, and we will be back.”

What are your goals and target markets in the future?
“Our goal is to definitely grow here in Europe, eventually we want to work with every agency, with every television company that we can to offer us hunderds of advertisers. But we see the need to make this a global solution, to be able to compete with North American companies, to compete with some Asian companies, so we definitely want to take this global in a way, that UK and North America is next on the line.”

AdScanner, helloCash, Hopalai (with its Kobi App), Movalyse (with its Vigo insurance) and Soplaya were the finalists of this year's PODIM Challenge. But pitching in front of the renowned investors brought only one winner - AdScanner, the Croatian based start-up, which is doing the next generation of television data.  The winning team will be awarded with an all-inclusive one-week business trip to one of the global startup hubs with a networking program and one year free office space for 6 members