Especially in times like these, with COVID-19 crisis outbreak, innovation is needed more than ever. Not only companies, enterprises, educational institutions, and governments are facing challenges, Podim as well is facing big challenges in coping with the uncertainty. The only thing we can be sure of, is that we will need a lot of new knowledge and breakthrough technology to innovate in finding new solutions.

At the moment it seems that connecting startups, scaleups, corporates, investors, and experts will happen in digital format or, as we call it, Podim Digital Experience. Luckily, University of Maribor (UM) is a source of creating countless new talents, capable of coping with new challenges.

Therefore we believe INNOVUM platform, through which the University of Maribor (UM) aims to ensure the development breakthrough of the Eastern Cohesion Region and thus reduce its lag behind the Western Cohesion Region, will also contribute to raising the Slovenian innovation index. According to the European Innovation Scoreboard, this index decreased by 10.6 percent in 2019, which pushed Slovenia from the second strongest group of powerful innovators to the group of moderate innovators.

University of Maribor is more aware than ever that the Slovenian innovation environment is increasingly lagging behind the European average while global competitiveness and technological advancement are increasing. UM is as well aware of its proactive role in the development of the region. That is why INNOVUM, together with the establishment of the Technology Innovation Center, is the central project of the current Chancellor of the UM prof. dr. Zdravko Kačič.

Partnering with Podim, the most influential startup & tech event in the CEE region, whether it will be held online or live, INNOVUM could as well enhance talent activation and help strengthen Maribor’s role amongst second-tier cities.

To provide infrastructure and to offer capable staff

INNOVUM is a solution for the needs of the economy, says Prof. PhD Miralem Hadžiselimović, Vice-Chancellor of the UM, responsible for infrastructure: “In particular, small and medium-sized enterprises do not have the development departments and their own staff and research infrastructure to achieve the development of their products, processes and services, and we want to provide infrastructure with the INNOVUM platform on the one hand and on the other offer human resources, as UM has about 1,200 researchers who can bring added value to R&D activities for the needs of the economy in all breakthrough fields. “

Vice-Chancellor Hadziselimovic says that it is often the case that companies develop semi-finished products, semi-processes and semi-finished products, which then remain in the hands due to the absence and fragmentation of development potential. “That is why we want to make a step forward with the commercialization and marketing of the supportive environment so that the products will make to real life, to be on the shelves, especially abroad, and to give added value to our economy in this way,” says Vice-Chancellor Hadziselimovic.

He is pleased that the UM has already introduced the INNOVUM platform to the Minister of Economic Development and Technology, Zdravko Počivalšek: “The platform is supported, our intentions have been recognized.” 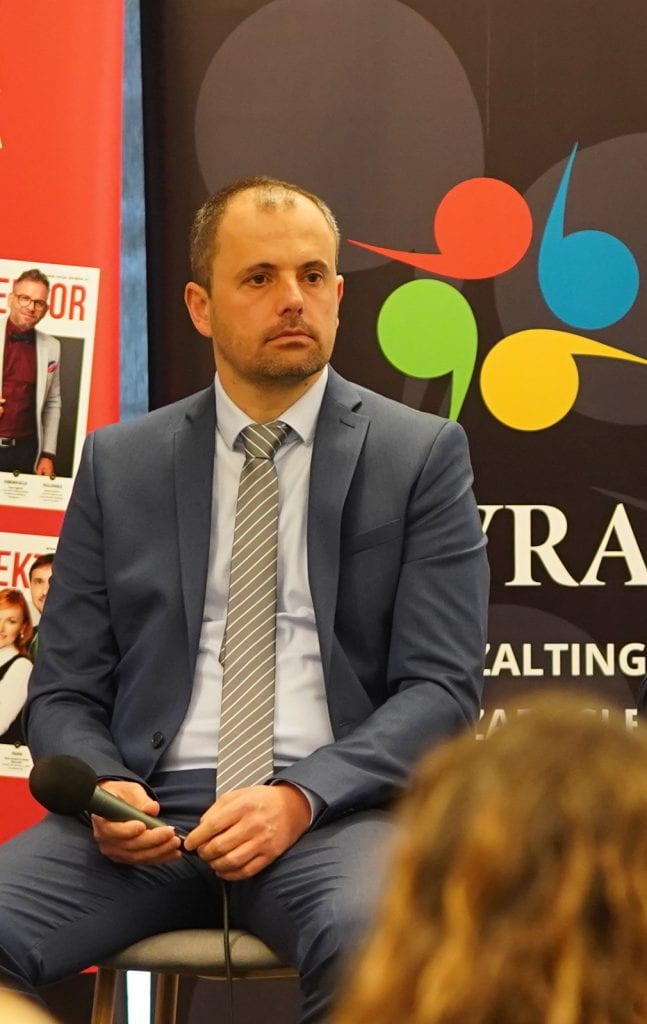 The Vice-Chancellor of the University of Maribor prof. dr. Miralem Hadžiselimović: “The platform is supported, our intentions have been recognized.”

The development of the supercomputer is already an extension of INNOVUM

Among the projects that will form INNOVUM is the HPC-RIVR project with the development of a supercomputer in Maribor, which addresses the fields of artificial intelligence and digitization of modern society. The establishment of a research infrastructure that will be open to the interested economy through open access will also follow. This also means the construction of facilities, the procurement of equipment and the provision of adequate human resources.

The University of Maribor also wants to place all equipment and mechanisms in local environments where necessary. For Maribor partnering Podim with INNOVUM also means strengthening its role amongst second-tier cities, as the report by Startup Europe Partnership, launched in November 2018 by the European Parliament, reveals that over the next couple of years in Europe, about 50 big cities will dominate in the field of innovation in the economy, while smaller cities, so-called second-tier startup cities, will be threatened by marginalization, thus increasing the gap between first-tier and second-tier cities.

By stating that UM creates good “products”, Miralem Hadžiselimović means graduates of technical fields, who are easily employed at home and in the wider regions. “But young people are leaving because they do not have the opportunity to work in high-tech jobs here and because our products are of low added value, so employers are also unable to provide adequate salaries,” says the vice-chancellor.

At the recent meeting of directors and managers where UM presented the INNOVUM project, the Minister Zdravko Počivalšek emphasized that the educated workforce is the trump card, which led Maribor and the region to receive a foreign direct investment, the Magna factory in Hoče.

He believes investing in research, development and innovation is the key: “We are moving from muscle commercialization to brain commercialization, and this is the only real path to higher added value.” He added that there is no progress if we fail to bring the local community, economy and state on the same page.

Innovation is now needed more than ever

Podim, as an element of innovation platform INNOVUM, could also help strengthen Maribor’s role amongst second-tier cities and enhance international partnerships among entrepreneurs, field experts, corporate representatives, and investors Especially in times like these, with COVID-19 crisis outbreak, innovation is needed more than ever. Not only companies, enterprises, educational institutions, and governments are facing challenges, Podim as well is facing big challenges in coping with the uncertainty. The only thing we can be sure of, is that we will need a